On February 16th, 2020, Victoria & Austin were united in marriage surrounded by their closest friends and family at the elegantly rustic chic Mulberry venue in New Smyrna Beach, FL.

The photographer, Zoe Steindl captured all the memorable moments of the lovely couple’s special day. The groomsmen hyped the groom for his ceremonial entrance, the song that played during his entrance was  I’m The Man by Aloe Blacc.

Victoria and all her bridesmaids looked captivating. Lauri Gallagher styled Victoria’s and her bridesmaids hair by creating softs curls to compliment their style and their make-up was done by Bridal by OUAB. The lovely floral arrangements were done by In Bloom. The floral arrangements complimented the color scheme of the wedding. The coordinator who ensured the day would go smoothly was Envy Lifestyle & Event Design. When the ceremony commenced, the bridal party walk down the aisle to Make You Feel My Love by Adele.

Victoria’s bridal entrance song was to,  Can’t Help Falling in Love by Hailey Reinhart. She captivated everyone’s attention as she met Austin at the altar. The videographer, Candice Williamson captured the experience of their big day.

Victoria and Austin shared their love at the altar. They were ready to start their journey together as one.

The lovely couple were now Mr. & Mrs. Rodgers. The the bride and groom’s recessional was I Found You by Andy Grammer. 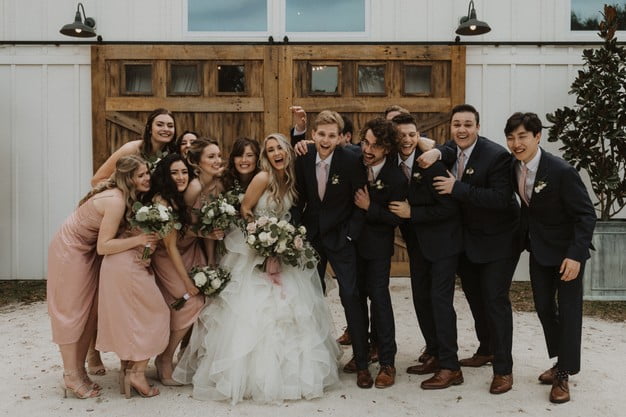 For the newlyweds’s grand entrance, Howlin For You by the Black Keys played as they were introduced to the reception as Mr. & Mrs. Rodgers.

The Austin and Victoria’s first dance was Clear by Need to Breathe.

The dinner was provided by Riverside Catering. The brides grandfather blessed the food for the evening. After dinner, the best man and the maid of honor made toast’s to Austin and Victoria’s union. They shared lovely memories of how they met their best friend and how the couple were meant to be.

The newlyweds also enlisted our company Xclusive Photobooths to bring laughter and smiles to everyone. The photo booth allowed for people to show their character and to break the ice.

The cake was done by The Bake Shop. The song that played for the cake cutting was Cake By The Ocean by DNCE.  After they cut the Cake, our Deejay Andy kicked off the party with various genres like Top 40, Motown, Classic R&Beat, Hip Hop Modern & 90’s, Rock, and Country.  Later in the evening, Victoria gathered all her single ladies to be a part of the bouquet toss. The song that played during the  bouquet toss was Formation by Beyonce.

The last song to wrap up the night was Bohemian Rhapsody by Queen.  After the last song, they had a last private dance. The song that was played, was Good to Be Alive by Andy Grammer.  The night came to a close with a sparkler exit to end their night and to start their journey as Mr. & Mrs. Rodgers.

Thank you, Mr. & Mrs. Rodgers, for allowing us to be a part of such a special day in your lives. We wish you lots of love on your journey together & beyond